You’ll most usually see car engines referred to in terms of ‘horsepower’ or otherwise ‘brake horsepower’. You can’t walk ten feet at a car show without overhearing endless comparisons and boasts about the 0-60 stats of a car as well as the engine’s horsepower, but what does it actually mean? And, perhaps more interestingly, where does the phrase come from?

The Invention of Steam Powered Horsepower

Until the invention of the steam engine, humans had recruited horses (and other farm animals) for thousands of years to do the really hard work that needed doing. Things like speedy transportation, heavy lifting, ploughing, hauling, and so on. These are all things that could have been done manually by burly, bearded people but were done much more effectively by, say, horses or ox.

The primary invention of machines like mills, water screws, and so on, meant that certain specialised tasks could be done far more efficiently, but it still took many people lots of physical effort to work those machines.

When animals started to be domesticated, a task that would take five men a day could, quite soon, be done with just one man and a horse in half a day.

Fundamentally, the domestication of animals for work was as much a technological leap as any other. So it’s no surprise that eventually it needed to be surpassed by something more efficient.

That more efficient invention was James Watt’s steam engine. But by the late 18th century, the use of horses for hard labour was so ingrained in workers’ and managers’ minds that it was hard for many to conceive of something that could work better. So James Watt created the ‘horsepower’ as a unit of measurement to be able to compare how much work an engine could do as opposed to a horse.

How many horses in horsepower? 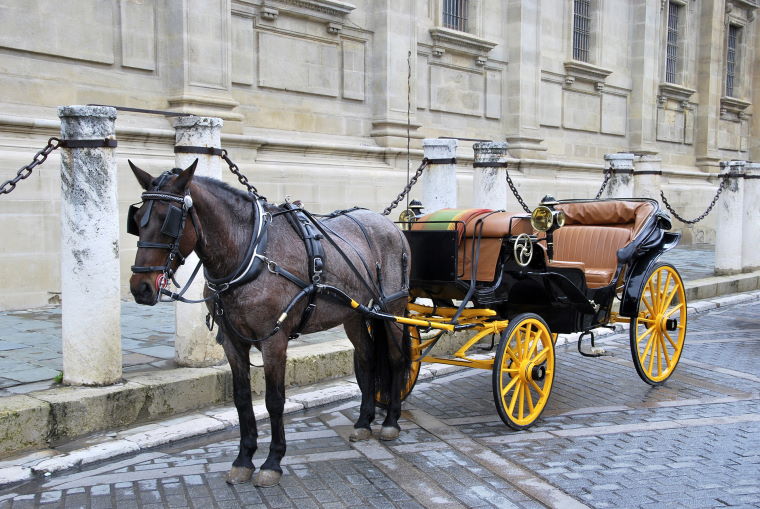 Watt defined 1 horsepower as ‘the amount of work required from a horse to pull a 150lb weight out of a hole that was 220 feet deep.’ Which are some fairly strange numbers to settle on but - in essence - the aim is to compare how much force a thing is able to exert over time. Put simply:

In more digestible, metric, terms - the amount of work (energy exerted) of 1 horsepower is equivalent to the ability to pull a 75kg weight upwards 1 meter in 1 second.

The actual amount of weight that a horse could lift or pull at one moment is much higher than 75kg – and obviously depends on the size of the horse and whether it’s had its Weetabix that morning – but a horse pulling a 500kg weight will get tired much sooner and need to stop. In order to get a full day’s work, you’ll need more horses.

This then made it much easier for factory managers, mine operators, and a host of other business people to compare how much more work they could get done if they used a steam engine as opposed to their current force of horses.

So there we have the horsepower of an engine. In theory, this means that a roughly 80hp Vauxhall Corsa engine could lift roughly 80 average-sized people 1m off the ground in 1 second!

When manufacturers talk about the ‘horsepower’ of an engine, the number refers to the theoretical ‘pure’ power that the engine is able to produce. A more useful number, however, is Brake Horsepower.

This kind of horsepower is a measure of how much an engine can output with all of the necessary loads applied to it. These loads are things like the alternator running faster to power air conditioning as well as how much force the engine is able to exert in excess of the weight of the vehicle.

That’s because a certain engine may be able to output a certain amount of power in theory, but that doesn’t necessarily reflect how fast a car will go if the engine’s put in a particularly heavy car with poor aerodynamics. Brake Horsepower, then, is a useful comparison of how powerful an engine will be when accounting for the basic loads you’d expect.

If your car’s engine isn’t feeling as strong as it used to, bring it into your local Kwik Fit centre for an inspection - it may need a gasket replacement or something as simple as an engine treatment.